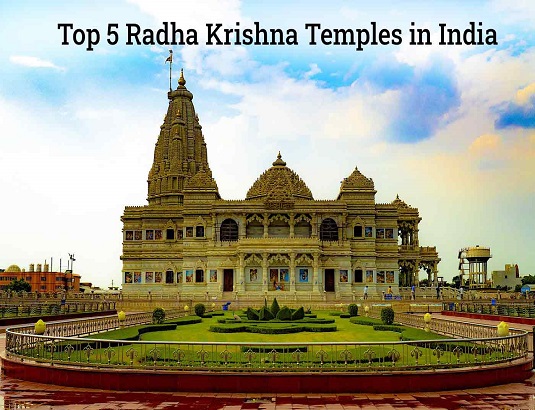 On this festival send Krishna Janmashtami wishes & quotes to your family & friends with Happy wishes & Messages.

In some cultures, the Bengalis do not worship Krishna alone. According to their traditions, they never would place a photo of Krishna without Radha in their homes. Krishna is the eighth incarnation of Sri Vishnu and Radha is believed to be the incarnation of Sri Lakshmi.

Why Radha is to be worshipped alongside Krishna?

Thus, Sri Radha Krishna temples are widely prevalent in those areas where pagan believers were in plenty. In those days there were two forms of division existing in the Hindus. One clan believed only in men and women were always meant to power men. Another form were the pagans who believe in the growth of women as much as the growth of men. They worshipped the womb of the holy mother.

According to them, both the human forms that existed were divine and were meant to achieve their highest forms. Maha kaal and Maha kaali both regulate the passage of time, not alone Maha Kaal. Time can be balanced by the presence of both.

Designers of the world felt women could be adding up to the growth cycle thus adding and creating more competition, hence wanted to keep women aside. Thus, suppressing women due to their lean built was adopted successfully by many religions thus eliminating the womb’s importance.

Majority of Hindu races stood out of the womb’s origin and used its powers to fulfil selfish ends. However, the truth is, women were required in every sector as much as men.

Why Radha is worshipped aside Krishna?

The word Radha is derived from the root word, “Radh” which means perfection and plentiful of wealth. She completes Krishna, so it is believed. In order to not deprive women, Radha is worshipped alongside Krishna.

One reason put forth by people is that since Radha did not obtain the highest position alongside Krishna in this mortal realm, somehow Krishna could never forget her, nor neglect her. Thus, he gave her the status of being worshipped aside from him ever since.

Not many Shri Radha Krishna temples thus, were built even across the whole of India.

It is situated near the Banke Bihari temples of Mathura. Radha Ashtami is primarily celebrated in this Shri Radha Krishna temple with a huge festive fervour. The appearance of Sri Krishna in his complete “sixteen Kala avatars,” alongside Sri Radha in the Vrindavan region is a well-accepted and proven fact. It is not a mere legend but there are various celebrated facts that prove it right.

There is no deity of Sri Radha ji here, however there is just a crown which is worshipped in her name, placed aside Sri Krishna. It is a symbolic representation of the relationship Radha and Krishna had in their lifetime.

Sri Radha resides here in her most glorifying forms and her surreal power can be felt within the walls of the temple. This Shri Radha Krishna mandir is a must visit soon after you have visited Banke Bihari temple in Mathura darshan.

The temple is called Shree Radha Ras Bihari Ashtasakhi Mandir. Legend says that there are only two places where Sri Krishna performed Ras Leela in Mathura and Vrindavan. This temple is one such place. Devotees have heard the anklets beating to a tune around the temple on special days. It is a feast for those who believe in the living form of Krishna and Radha.

Only when you visit the temple will you know what you are missing if you don’t visit it.

Radha Raman Shree Radha Krishna temple was constructed around 1542 AD and is a modern era temple in Vrindavan. This is also among the seven Shri Radha Krishna temples of Thakur. It is carved exquisitely into an ornate pattern of designs. It is known to house the original Shaligram Shila of Sri Krishna alongside Radharani in the temple complex and is a must visit.

It is believed that Gopal Bhatt had a dream wherein the Lord instructed him to go to Nepal. In Nepal while bathing in the Kali Gandaki he found several Shaligram shilas entering his pot. He sends them back to the river, however when he refills the pot, they enter again. A total of 12 shaligram shilas were brought back by him. On a full moon day, after offering food to the 12 shilas, he puts them to rest. In the morning after he comes back from a dip in Yamuna, and lifts the cover with which he covered the Shaligram shilas, he sees that one of the Shilas had manifested as the Damodarshila where you can clearly see the form of Shri krishna.

This is how the origin of the Shri Radha Krishna temple came into being. Life and forms move on and so did the temple’s formation.

For more into the exquisitely carved architecture of the Shree Radha Krishna temple, you need to visit it. You find Krishna in his black form on the Shaligram Shila beside Radhaji and other gopis.

In the year 1580, the King of Bharatpur found the status of Shri Radha Krishna in his treasures. It was not there before and was found to have self-manifested in the treasure house. The king brought this idol to the sacred hut of Sri Shyamananda prabhu and performed her marriage with Shri Shyam Sundar on the occasion of Basant Panchami. Now, the king built a beautiful temple dedicated to both of them and established the deities in the Shree Radha Krishna temple.

The Shri Radha Krishna temple is quite scenic with a big open space and a large stage made of marble.

The best time to visit this Shri Radha Krishna temple is during Vasant Panchami when the temple is decorated to celebrate the wedding of Shri Krishna and Shri Radha.

(International Society of Krishna Consciousness) was established by Shrila Prabhupada. He was a disciple of Shri Chaitanya MahaPrabhu, the direct incarnation of Shri Krishna, so it is believed. It is a conglomerate of four major Krishna Sampradayas. Brahma-Gaudiya-Madhva sampradaya, founded by Lord Krishna Himself and the three others referred to as the Sri (referring to the goddess Laksmi) Sampradaya, the Rudra (referring to the god Shiva) Sampradaya and the Kumara Sampradaya.

This organisation is based on the teachings of Bhagavad Gita and everything around the temple is built on its precepts. Shrila Prabhupada began the Shri Hari Krishna movement. In this movement, there are some principal teachings that are followed by the disciples.

1)   Only through the practice of true spiritual science, one can get rid of anxiety.

2)   The body is not eternal but the soul is, and is a figment of this huge universal process.

3)   Krishna is the eternal, omnipresent lord of the world.

4)   The truth of the entire world is held in the Vedas, and they are considered to be the highest centres of knowledge for humanity.

5)   You need to have a spiritual master to learn the Vedic knowledge.

7)   Whatever actions you perform, devote it to Shri Krishna and none to yourself.

Shri Krishna is never worshipped alone in these regions since it is believed that he never existed alone ever. His mind and his soul were always connected to Shri Radha wherever they were. It is thus mandatory to worship the masculine and feminine force together.

With this philosophy grew several mutts or beliefs and several Shri Radha Krishna temples grew away from it. Time separated these two ways yet both exist in nature. Since the dual nature is worshipped everywhere around the world- incorporated in the night and the day, the Sun and the Moon, the man and the woman, the life and death, thus, worshipping Shri Krishna with Shri Radha seems to be a very logical and analytical course of one’s thought.

May you find grace and happiness in the presence of Shri Radha and Shri Krishna.

May He bless the whole world and take in every single soul glorifying into him.

Take The Plunge! Go Skydiving at These 5 Destinations

5 Best Places To Trip To France